Carers Trust Norfolk is launching a vital new service for young carers who suffer from mental health issues. The launch is being held on Thursday 15 June at Dereham Football Club to mark national Carers Week, 12-18 June. 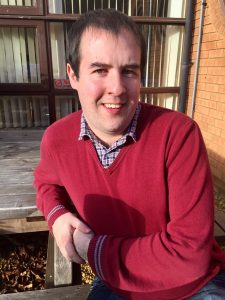 Andy McGowan, Norfolk Young Carers Lead Participation Worker (pictured right), said mental health problems, such as depression, is a huge issue for young carers whose plight may reach crisis point before they are given the support they need.

Andy said: “Young carers from across the county have told us that mental health is a huge issue for them and the people that they care for. Many young carers find their own mental health is impacted by their caring responsibilities, and, while providing much-needed support to family members with mental health issues, they are often not being identified themselves as in need of support until hitting crisis point.

“The ‘Carers in Mind’ campaign is designed to help shine the light on this hidden group of young people to ensure that they get the support that they need at an early stage. We want to help raise awareness and increase confidence for professionals across a range of sectors, including health, education, statutory and voluntary sector to ensure that these young carers are not being forgotten.”

The campaign comes under the umbrella of Norfolk Young Carers Forum, run by Carers Trust Norfolk. The Forum is made up of young carers from across the county who have a caring responsibility in the home and get together to try and make life better for all young carers in Norfolk.

Before Danni joined Norfolk Young Carers Forum, the impact of her caring responsibilities meant that her attendance at school really suffered as she struggled to balance everything, to keep up with her work. She hadn’t told anyone in school that she was a young carer as she didn’t know that they could help.

“My mum has fibromyalgia, autism, bi-polar, M.E, arthritis, hip dysplasia, inverted hips and my brother has different things including Aspberger’s and Irlens syndrome.

Are you a young carer in Norfolk?

Want to know more about the Norfolk Young Carers Forum?

Do you need help caring for someone?

Find out about how we help people to continue living in their own home.