Young carers in school – the value of good support 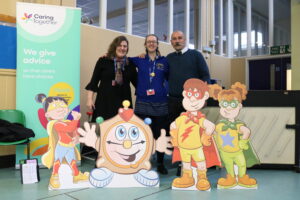 One of the fastest growing age groups of carers is young carers.

This means that having the right support in schools is invaluable for first of all identifying young carers who may be helping to look after a brother, sister, parent or another family member.

Magdalen Gates Primary School have the Carer Friendly Tick Award – Education for their work with pupils. They also played a key role in producing a resource, including an animation, for primary schools to use with Early Years Foundation Stage and Key Stage 1.

Elizabeth Howard updated us on the work Magdalen Gates Primary School have done since coronavirus:

Before COVID-19 threw everyone’s world into disarray, at Magdalen Gates, we were busy getting on with our ‘normal lives! ’in school!

Our long established CareRangers clubs were ticking along nicely with Rose Chapman and I running them. We had another recruit in our colleague Ruth.

When we set up CareRangers several years previously, we had developed our own Young Carers assessment tool to help us identify and then invite pupils into the group.

In her role as the pupils’ Social and Emotional support worker, our lovely colleague Satvear is ideally placed to do the assessments. The assessment is done in a very informal, chatty way to gain a picture of home life for the pupil in question without them feeling we are prying or judging.

Another very useful string to our bow is that Rose works in Reception which means the CareRanger radar is working from arrival onwards with our pupils! Younger carers can pass under that radar quite easily; hence building a relationship with the families from day one is a great way of spotting them.

I spend quite a lot of time hanging around Reception at the start of each school year, especially when parents are about!

Once we have identified a Young Carer, we have a positive response to offer them. This comes in the form of a CareRangers Club invitation.

Leading up to the Easter break we continued to offer our identified young carers their weekly lunch time clubs.

The clubs are voluntary and spontaneous attendance is the norm.

They can dip in and out as they like – sometimes they just want to be with their friends on the main playground, sometimes they enjoy the exclusive feel to the CareRangers clubs – not everyone can be a member!

Our Monday after school club for the older ones had recently gained a new volunteer. Grace was on a sabbatical from studying at UEA and having been a young carer herself, was dedicated to helping us.

She was leading some great creative activities; whilst Rose and I helped others burn off some energy with rather more boisterous games.

After Easter, had we returned, Rose and I would be especially alert to the upcoming SATS and mindful of our Year 6 CareRangers, as they are prone to feel the pressure more keenly than most. Sometimes this would simply be one of us leading the main after school group and the other making a quieter space for individual chats.

Any concerns could then be fed back to the relevant staff if more support was needed.

Young carers often internalise their worries, including about SATS, as they don’t like to cause more worry at home.

So there we were back in March, ticking along yet already feeling a bit of pressure due to being short staffed for various reasons. Little did we know those pressures were small fry – it was all about to be washed aside in the tidal wave of a Pandemic!

During lockdown (before schools opened to all pupils):

At the beginning of lockdown, many of our families had a phase where things went quiet. This was a novel situation initially enjoyed by some but for others tinged with all kinds of fears.

Many CareRangers’ families were shielding due to the health needs of family members or due to anxiety relating to Mental Health problems or addiction to alcohol or other substances.

I rapidly realised that my role in family support could carry on from home just by using different forms of communication.

Being at home also meant that I could flex my hours around the needs of the families. I started by opening up my hours to cover 9am to 5pm Monday to Friday as needed.

Once school geared up and started to open for children of key workers and vulnerable pupils, we were able straight away to consider the needs of our identified young carers.

Prior to lockdown, we had established that, taken on a case by case basis, members of CareRangers could potentially fall into the Vulnerable Pupil category.

The Leadership Team used our most current list of group members, enabling them to offer places to them as needed without needing to take further details. Our assessment tool had removed the need for that, and at a time when it was most helpful!

Knowing our families well was an essential factor. Already knowing them through the provision of positive activities helped us to better understand how the needs of family members affected their daily lives.

Parents reached out and admitted finding things very challenging where I’m certain they wouldn’t prior to the existence of CareRangers.

Some of the initial challenges faced by the families were practical in nature. It could be lack of space to study due to the needs of other family members. Lack of equipment and internet access were a challenge for some. Reduced income, delayed benefit payments, difficulty getting to the shops (internet shopping slots were scarce/expensive) – these are just some of the challenges faced by many of our families.

A daily round of making phone calls provided the framework for my days. If there was a crisis, I could bend my efforts that day towards helping the family find a solution.

The local Food bank volunteers were amazing! They responded swiftly when I called them about families with dwindling food/money, taking in the individual needs of the families and adding thoughtful touches which made people feel cared for, such as toiletries and treats as well as nappies and pet food where needed.

Some CareRangers and their families managed quite well to begin with, but then the pressure would begin to mount.

The adult carers had to wear many hats and naturally felt the pressure. They were dividing their time to try and meet everyone’s needs but often felt guilty and anxious about it.

Being tuned in to all this was essential, for example, doing a bit of digging around the response “we’re fine” when asked how they were might entail me asking what fine was looking like this week! This produced some honest responses where the veneer soon slipped.

Feeding this back to the Leadership Team enabled them to target the offer of school places towards those CareRangers for whom things were becoming less than fine.

As lockdown rules eased, I began to visit families in the outside spaces available, be it their garden or a local park. I also used ZOOM to have chats, although as an adult had to be present with the pupil, one CareRanger admitted he missed chatting without Mum being there!

Although this CareRanger was safe and happy and simply missing a bit of one to one time, it made me really appreciate the value of school as a safe place which it can be hard to replicate in the virtual world.

It was really difficult to envisage what the return to school might look like, not just for the families but also for the staff – the people tasked with keeping the pupils safe.

To begin with, the social distancing and maintaining the integrity of the ‘bubbles’ added a very surreal edge to the school day.

This was a time to reassure, not to judge as the post lockdown jitters were a very real phenomenon. Parents and children were naturally worried about exposing vulnerable family members to the virus.

The majority of CareRangers returned to school with no problem. Some had already returned due to family circumstances and were able to reassure the others. A small minority needed some extra time, care and attention spent on them, helping them adjust to life back in school.

This was definitely not the time for a ‘one size fits all approach!’

In recent weeks, the ‘new normal’ seems to have bedded in. Rose and I sent a letter a few weeks ago to the CareRangers to let them know they were not forgotten. Looking into ways to safely reinstate the after school CareRangers, we have come up with a plan! The club will be every other week for the pupils apart from Year 6, which allows us to maintain the bubble system..

Year 6 will have a weekly club on a different day with me.

After our introductory session two weeks ago, one new after school CareRanger proudly told his Mum “they only have one rule in CareRangers – you have to eat cake!”

Not QUITE correct! Clearly we are a work in progress regarding club rules; I think we can all agree what the main theme for session 1 will be!!!

We will make sure the CareRangers maintain their sense of belonging, even if it looks a bit different for a while!