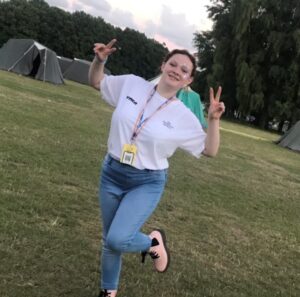 Caring Together support carers of all ages in a range of ways. We were recently delighted to be able to give young carer Ashleigh the opportunity to spend a couple of days doing some work experience with us.

Read more about what this involved and how Ashleigh learned more about the work of Caring Together:

Hi, I’m Ashleigh I’m 15 and this summer I did some work experience with Caring Together.

I decided to do it with them because as a young carer myself I’ve recently realised that in the future I want to help other young carers as much as they helped me.

On the first day I was given an introduction by Andy [head of engagement], and I met with Belinda who is the carers awareness and voice team manager, and then also with Claire who works with Belinda and runs the young carers forum in Norfolk.

They both talked about how they have fun in their jobs while raising awareness of all ages of carers at the same time, and how important their jobs are to them.

Belinda spoke about how she goes into schools, universities, work places and does assemblies on how to raise awareness of all carers. Claire spoke about how she works with the Norfolk Young Carers Forum and how they sometimes get to go to activity centres and residentials.

Then after lunch I spoke to Ruth who is the bursaries and helpline manager. She spoke about how whenever there’s a call, the carer speaks to the referral team who assess the situation and then decide from there on who to pass the caller onto.

She tried to make it prominent to me that her job isn’t as much ‘fun’ as the others, but it made me realise that her job in some senses could be the most important as for most people the phone line would be their first place to turn to if they’re struggling.

Ruth also spoke about how her team also are the first to receive the emailed requests about bursaries. Depending on what they’re requesting them for and if the requests are for a good enough reason, then they will get sent to Gemma [communities service manager] for confirmation that Caring Together are able to give them the money they have asked for.

Then after this I got on with some tasks that Andy had set me, one of which was a template for other young carers to use and also making some recordings about my experience at the young carer’s festival.

After this I was lucky enough to speak to the CEO, Miriam, about her life as a CEO and how she got the job.

She said to me that she was CEO of other charities before Caring Together and the most important thing to her as CEO is to help people and be there for both the people you’re helping and your staff as well. She also said that even though this job was the first time she had worked with young carers, they also inspired her so much that she wanted to help them in any way she could.

After that it was getting to the point of the day that I had finished everything and so because I had some extra time, I helped Andy with a project of his to help carers to their right to carers leave. Then I was finished for the day.

On the second day I spent it with the communities team who organise all the trips.

I got given an introduction by Mellissa [carer advisor – communities], then I went to talk to Gemma who is the manager of the community’s team.

She told me all about what she does, how she supports her team and how the different people on her team do different things.

Mel, who works with young carers, she is given a certain amount of budget and then plans trips including the risk assessments. I spoke to Becca, who also works with Gemma’s team. She works with adult carers, doing similar to Mel, but she plans trips that the different age group would prefer.

Then I had a meeting with Jeannette [communications officer] who spoke to me about the awareness raising work Caring Together do including via social media.

We had a little chat to get to know each other better then spoke about how they try and post a variety of things on social media and the website to showcase what they do and why. She then asked me for my opinion on things and how I thought they could do better, so she gave me the chance to share my views and opinions on different things.

Then it was lunch, lunch on both days were cool. They told me about a rule that they have that they can’t eat in the office or around their screens as lunch is a chance to have a screen break and it’s also a chance for them to all connect with people that they may not work with or that aren’t on their team.

After lunch I worked on a task that Mel had set of me, and it was to plan some Halloween trips from swimming to pumpkin baking and Halloween parties and it came under budget. When I showed Mel and Gemma my plans, they both thought they were quite good ideas.

It took me a little while to complete that task but I really enjoyed it.

I had a talk with Andy, talking about the experience as a whole. He said that he had emails from people I had met with, and  that all the ideas that I gave them they really liked them, and that the CEO Miriam said that she would love to have me back in a couple of years to work there because I impressed her! I said to Andy that everyone was so nice. It was nice because, I know a lot of places say this, but they honestly seem like such a family – not just work colleagues.

This experience was nice for me as I normally get to see the things they do from a young carers point of view after the more technical stuff is done – when they get to do all the fun stuff like trips or festivals. And over these two days I got to see the behind-the-scenes bits and how they get to the fun stuff.

So, thank you to Andy for setting it up and everyone for helping me learn more about what goes on and what I want to do when I get older.