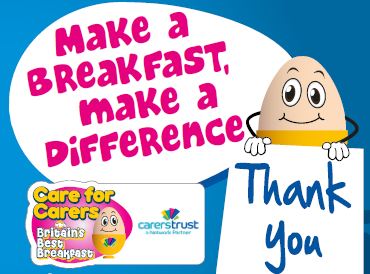 The menu included pastries and bacon sandwiches, samosas and cereal, with calories forgotten about as staff enjoyed their mouth watering meal. Quizzes were also held at the brunch, such as guessing the weight of cornflakes in a jar, and which country of origin different breakfasts came from.

Tania said it had been a great day, and they were joined by an unexpected guest – a delivery driver who had been passing by stopped off to join them and made a £10 donation.

“It was an unexpected opportunity for a passer-by to learn about our work,” said Tania.

She urged organisations to take part and hold their own event to mark Britain’s Best Breakfast, a national Carers Trust initiative that runs throughout autumn and winter.

Tania said: “This is a fantastic opportunity for people to get together over breakfast or brunch, either in an office or school, and learn more about care givers of all ages. These can be young school children who have a caring role at home, or family members who are exhausted because of juggling  their working life with being the primary care giver for a loved one. We want to identify them earlier and support them to protect their health and well being.

“There is still time for people to plan a fundraising breakfast, and it can be a simple croissant and coffee.  All the money raised goes towards making life a little bit better for Britain’s unpaid carers. We would also like to thank Sainsbury’s for donating a £15 voucher towards the brunch.”