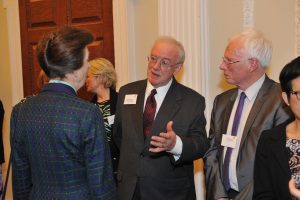 Stuart Evans, Chair of Trustees, joined Her Royal Highness The Princess Royal and distinguished guests at an annual event designed to raise awareness of the issues carers face and highlight the support that is available to them through the Carers Trust network.  The evening event took place at Mansion House on Wednesday 3rd April 2019.

Just under 100 guests, including representatives from Carers Trust network partners across the country, heard from young carer, Izzy Farrell who described her responsibilities looking after her mother and the impact that this has on her life, as well as how her local Carers Trust service has helped her and her family.

Her Royal Highness The Princess Royal, President of Carers Trust, took the opportunity to express her pride at being involved with the charity since 1991, when people caring for others were scarcely recognised as a group requiring support.  She was however, keen to emphasise that there is more to be done to make sure carers and young carers receive the help that they need.

She reflected that anyone can become a carer at any time and that people do not always see themselves as a carer and do not necessarily recognise their own needs.  With three in five people becoming a carer at some point in their lifetime, and with so many people living for longer, the number of those who are becoming carers is increasing quite dramatically, with as many as seven million carers in the UK today.

Her Royal Highness The Princess Royal’s call for support and recognition of the vital role that family carers pay in our society, coincides with the last call for nominations for Carers Trust Cambridgeshire, Peterborough, Norfolk’s annual Pride in Our Carers Awards.

Celebrating the valued work of family carers and the people and organisations that support them, there is just one week left to nominate people for the nine award categories.  Shortlisted nominees will be invited to a special event during Carers Week 2019 (10-16 June) where the winners will be revealed.

Stuart Evans is grateful for events such as these which highlight the important work that is being done at both a regional and national level to support carers and, more importantly, raise awareness of the things we can all do to help:

“There are around 178,000 family carers across Cambridgeshire, Peterborough and Norfolk.  This number is projected to rise to 264,000 by the year 2030.

“The awards are our opportunity to, not only acknowledge and say thank you to these people and the people that support them, but to inspire individuals, organisations and businesses to do what they can to make caring easier for the three in five of us that Her Royal Highness The Princess Royal talked about, who will take on a caring role at some point in our lives.

“I am asking you, if you know someone who goes out of their way to help and support someone and who makes a difference to their life, or a carer friendly GP practice, health and social care professional, teacher, community organisation or businesses that supports family carers here in Cambridgeshire, then please nominate them now for the Pride in Our Carers Awards 2019.”

Nominating is quick and easy and can be done online at www.carerstrustcpn.org/pioc-2019.  Alternatively, get in touch by calling 01480 499090 or emailing [email protected] for a nomination form.