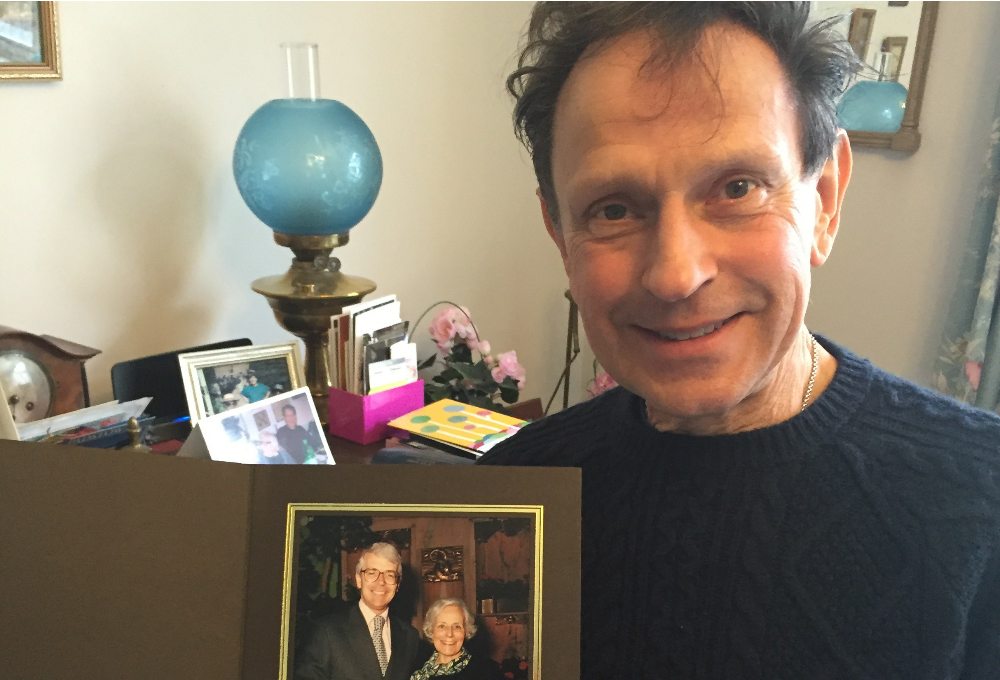 Retired teacher Steve Farrow moved from London to care for his widowed mother, Mary, at her Ely home after her discharge from Addenbrooke’s Hospital following an acute stroke on September 21st 2015.

Steve’s arrival then enabled Mary, 92, to be discharged from Addenbrooke’s Hospital, Cambridge in early November and to return home as she wished, rather than have a prolonged hospital stay or move into a care home.

“Before she was discharged, I was terrified at the thought of caring for Mum, not knowing what to do, but I was the only one in the family in a position to do it,” he said.

Thankfully, expert help was on hand for Steve, 66, from occupational therapists, physiotherapists and speech therapists, arranged via the Lewin Stroke Unit at Addenbrooke’s Hospital, to offer support him, training him how to help move his mother around, encourage her to do exercises.  They also provided extremely useful adaptations for her home.  An agency carer came in and washed and dressed his mother for half an hour in the morning and then again at night.  Her own GP also supplied valuable support and came to see her regularly.  Carers Trust Cambridgeshire offered respite care and assisted Steve in preparing a What If? Plan to plan for an emergency.

He admits it was a huge learning curve.  “Nevertheless, it made an enormous difference knowing all this and having such fantastic support.  I was much happier, I was confident.  I knew Carers Trust Cambridgeshire existed for my benefit if I was flagging or unwell, that I could contact them for support, and the Lewin Stroke Unit was amazing.  All this gave me tremendous reassurance and, most importantly, it meant mum could stay at home as she wished.  After my training we could manage her movement around the house and the occasional fall.  I was also able to take her out for walks.  These things were no longer a problem.

“Most importantly, mum was pleased I was here for her.  She enjoyed the meals I prepared, including her breakfast of porridge made with desiccated coconut and bananas and raisins, followed by eggs and then toast.  We were managing extremely well and I felt that I could continue caring for her for a long time.”

However, the repeated disturbed nights began to take its toll.  Steve was having to get up three times a night to come to his mother’s aid.  After 13 weeks of being his mother’s full-time carer, Steve arranged a five day respite break to get out of the house and work on an art project.  His mother understood and she agreed to go into a local care home with an excellent reputation.  Her bag was packed, but sadly on 8th February, the very morning she was due to go to the care home, she had a catastrophic stroke and was re-admitted to Addenbrooke’s.  She passed away a month later in the Arthur Rank Hospice.

Steve says his experience supporting his mother gave him a totally new insight into the lives of family carers, the challenges and trials they face and general exhaustion.

“I’m glad I was able to be there for my mum at the end when she needed me.  My advice to family carers would be to take what support you can, it’s there if you ask for it.  More people need to be aware of the valuable support offered by Carers Trust Cambridgeshire.”

* Steve was supported by Jo Crocker, a Carer Support Officer with Carers Trust Cambridgeshire at Addenbrooke’s Hospital.  Our work there providing information, support or something more long term makes a positive difference to the lives of family carers of people who are in hospital or attending an outpatient clinic, or to members of staff who are family carers.

“Many of the people we meet, like Steve, have no idea about the type of services that are on offer for them as unpaid family carers and the support which is available to them.  They nearly always say they wished they had known about us earlier,” she said.