Skip to content
Home » David and Eleonore – facing dementia together 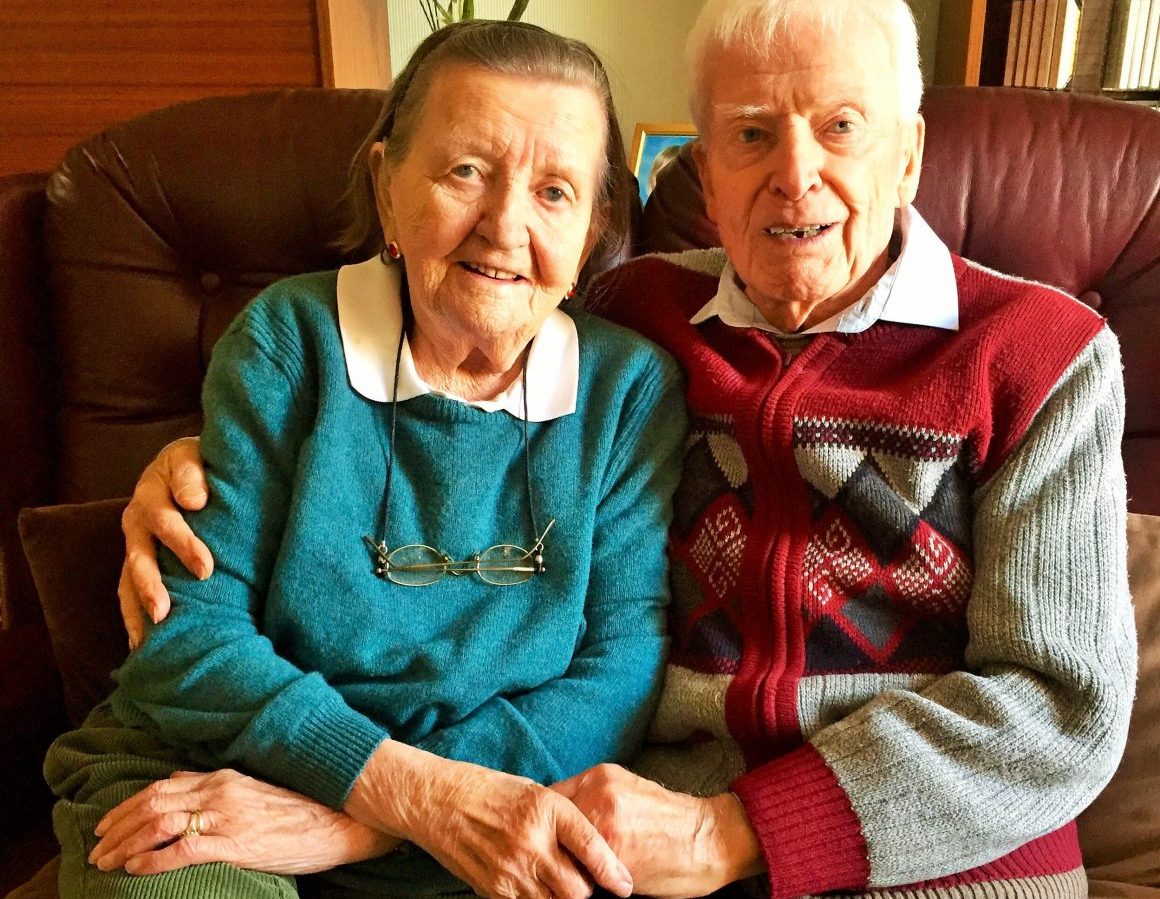 David and Eleonore – facing dementia together

David and Eleonore Berry are used to overcoming major obstacles.

Many years ago it was Eleonore’s East German parentage that created challenges for them, thwarting David’s career in British military intelligence on security grounds.

But now they face their biggest hurdle, 60 years after first meeting and falling in love – living with dementia.

David, 92, is a devoted carer for Eleonore, 93, and until recently, he sole-handedly saw  to all her needs at their home near Huntingdon, from cleaning the house and shopping, to cooking and bathing his wife.

Eleonore was diagnosed with dementia 18 months ago and David is determined to continue caring for his wife as long as he can, despite the repeated broken nights he endures, sometimes having to wake up eight times a night to attend to her.

Eleonore suffers from a chronic kidney disease which causes her to wake up between four to eight times a night needing the toilet. The toll on David’s well being has been immense.

“I was very tired and it used to be very frightening because I could feel myself sinking under the weight of it all. I thought I would be able to manage and do everything, but I was worried about what would happen if I became ill,” said David.

A main concern is the number of falls that Eleonore has; in the last year Eleonore fell 12 times after waking at night and wandering around. She was admitted to Hinchingbrooke Hospital after a particularly bad fall last October and when she was released with a re-ablement plan, David began to use carer support workers to wash and dress his wife, and also has help from a cleaner, while he sees to all the shopping and cooking.

Eleonore also suffers from painful and debilitating osteoarthritis in her knee and is unable to walk outside, relying on David to push her in a wheelchair, which is no mean task for a nonagenarian, however sprightly.

There are still moments that David is exhausted, but then he always thinks back to the woman he first met in 1956 while posted at British Army headquarters in Rheindahlen, Germany where  Eleonore was based as a German interpreter working for the RAF Met office. During the war she had served with the Luftwaffe German Air Force as a radar operator, later becoming a courier and personally delivering secret despatches across Europe, as far afield as Russia, while David served as a telegraphist air gunner with the Royal Navy, an expert in morse code.

The couple met on 28 May 1956 – a date firmly engrained in David’s memory – which he recalls very clearly.

“We were working a bit late and I heard a dreadful noise outside, then a phone slammed down and I looked across the wing and saw this vision of loveliness sitting on windowsill. She was wearing a grey skirt, white shirt top, and she still had phone on her lap. She also had the best legs in Germany,” recalls David, with a twinkle in his eye.

He invited her out to the cinema that evening, and they were both instantly smitten. But their post-war romance during the Cold War faced continuous difficulties, with David’s boss sending him on overseas missions to keep them apart, concerned that Eleonore’s East German parentage could compromise his military work in imagery intelligence,

The couple eventually settled in Huntingdon in 1962, close to David’s civilian work at RAF Brampton where he was based as one of the UK’s first trainers in imagery analysis, with Eleonore becoming a PA. They married in 1970.

David’s love for Eleonore remains as strong today, six decades after they first met, regardless of his wife’s dementia. He says, holding her hand, “We’ve still got it. The warmth and closeness is still there, and while it is there, I shall continue to enjoy it. We still enjoy each other’s company. My idea of an ideal day is being with her, she is the most important person I want to be with.

“We enjoy listening to classical orchestral music. Eleonore is still the same person, she is just a person with dementia, and we are lucky this is in its early stages. I am enjoying what we have still got together and intend to take it day to day. Nobody can take away what we have, our memories – and there are some crackers!

“From the beginning we have had to fight to be together, we have had the joy of winning the fight and still being together all these years later. Dementia is just another hurdle.”

David has the following advice for other elderly carers: “Make time to do some exercise, it is absolutely imperative to keep yourself  fit. I used to do about 20 minutes every morning, now I only do 5 minutes to keep my joints flexible. I bend and stretch and roll my joints, and I can still touch my toes.

“It’s important to keep your strength up to push the wheelchair, otherwise your muscles will stiffen up. I may puff a bit, but I still push it. We go out everywhere together.

David is also active mentally, as well as physically, attempting The Times crossword each day.

Angela Whitehead, a Carer Support Officer, said: “I met David when I completed a Carer’s Assessment for him after Eleonore came home from hospital and he now has a personal budget to spend on himself to enhance his well being and enable him to have a respite break as a carer.

“They are one of the loveliest couples I have ever met. They both have a fantastic sense of humour, Eleonore never stopped smiling and was incredibly polite. They appear very happy I came away feeling quite humbled.”

Want support for someone with dementia?

We run groups for people with dementia and their carers.

Find out how to fundraise for us to support more people with dementia.