Skip to content
Home » Emma’s story as a Family Carer – “I was told ‘this is about you’, I wasn’t used to that”

Emma’s story as a Family Carer – “I was told ‘this is about you’, I wasn’t used to that”

“I wasn’t used to asking for help, not even from my family, but I knew I had to do something,” said Emma Joy-Staines, feeling increasingly desperate and exhausted as the caregiver for husband Leigh.

The stress made Emma suffer severe stomach pains and resulted in the 31-year-old mum of two young children being admitted to hospital for tests.

When she returned to her home in Isleham, near Newmarket she made a phone call that transformed her life.

“They put me in touch with Carers Trust Cambridgeshire. They have been my lifeline, the only organisation to proactively help us. I don’t know what would have happened because I was in a bad way, I was very scared.

“I was put in touch with Becca Browne, their Carer Support Officer, and she came to see me and just listened. I kept talking about Leigh, but she said ‘this is about you’. I wasn’t used to that. I cried and cried and cried. Nobody had listened to me before, or asked me how I felt.” 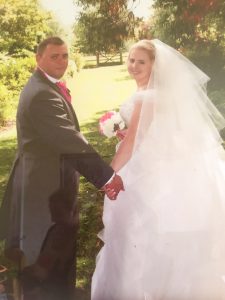 Emma is caregiver for Leigh, 34, who was born with club feet. He had a leg amputated in 2008 at a London hospital following a medical blunder, and since then has had to make repeated hospital visits because of infections to his stump, as well as being told he could lose his remaining leg.

Following Emma’s call to social services in spring 2015, Becca and fellow Carer Support Officer, Ruth Young, supported Emma by giving her a Carer’s Assessment which looked at how she was coping as a care giver and the impact this was having on her health and well being.

Emma was given a personal budget which she spends on cleaners at home, allowing her to have more time with her husband and children, Teddy, 6, and Sally, 3.  She was given the statutory Carer’s Allowance and advised to see her GP for a Family Carers Prescription. She used funding from this to treat the family to a memorable visit to the Peppa Pig theme park in Hampshire.

“It was great for all the family. We all laughed so much and the kids had a ball. The kids really wanted to go there, it made us feel very special.”

Emma was also given access to support from partnering organisations, including a professional counsellor and occupational therapist who assessed their home for specialist disability equipment in the home and assistive technology medicine packs. Modifications are also being made to the front and back of the house to improve access.

Carers Trust Cambridgeshire also helped Emma resolve a dispute with DWP who were planning to stop Leigh’s benefits, referring her to Village Benefits for help. Becca wrote a letter of support and Leigh not only won his case, but ended up having his benefits increased. Leigh was also supported in claiming for the Personal Independence Payment.

“It’s exhausting being a carer, but I feel I have the support I need now, it feels like I am winning. Before Carers Trust Cambridgeshire came on board, I felt I was losing, but they have given me the strength to keep fighting.

“It’s very important that family carers know their rights, and can access them at the right time. Becca was always saying, ‘what about you?’ If carers don’t realise their rights, we are going to have a lot of cared for people left on their own without support of someone fighting their corner if they are no longer able to cope.”

Emma recalls two key moments that had a great impact on her family’s life. The first relates to the summer school holidays when Emma asked Becca if the children could have a climbing frame in their garden. Although this was not possible, Becca was able to provide Emma with a £50 Argos voucher from her Family Carer’s Prescription.

Emma said: “They got every garden toy you could imagine – buckets and spades, and sand too; it felt like Christmas for them. That was a massive weight off my mind as we were going to be home all summer. Teddy also had a summer party here. He had been bullied at school with boys saying things about his dad. He was able to invite them over and it was really important for those boys to be here and see Leigh at the barbecue.”

Emma is now championing the cause of other amputees and has founded a national support group called Steel Bones, believing firmly that more needs to be done to help them. She has also learned the importance of making time for herself, booking in for a scalp massage and facial which she plans to make a regular treat once a month.

Ruth Young, Duty Carers Support Officer said: “I am so happy that Emma was put in contact with Carers Trust Cambridgeshire. When I carried out the first Carer’s Assessment with Emma her care giving was having a real impact on the whole family, but particularly on her health which resulted in her being admitted to hospital. Having recently carried out her annual review it is great to see a real difference in her and the family. It is important that carers recognise that they need to look after themselves. We are trying to reach out to unpaid family carers before they hit crisis point, and as Emma has highlighted just having someone to listen and put the carer first can make a real difference.”

* Caring can be harmful. Carers Trust Cambridgeshire is the leading provider of carers support for families in Cambridgeshire and Peterborough. If you are an unpaid carer looking after family, partners or friends, we can support you. Please call 01480 499090 or email [email protected].

* Both Becca and Ruth have been shortlisted in the East of England Care Awards, the Putting People First/Personalisation Award, for their work supporting Emma. The results will be announced on 29 November in Cambridge.

Available to caregivers in Cambridgeshire and Peterborough.