A Huntingdonshire family’s lives were changed in a split second caused by an accident at a youth football match.  It is an example of how caring can be thrust upon a family in the blink of an eye, with no time to get used to their caring role, with no gradual build up that some carers experience.

It was a game of football that changed our lives.  My son, Lewis, had the ball at his feet, dodged the defenders, was sprinting down the pitch towards goal to score, everyone was hyped that he may score and win the game.  The goalkeeper came running out of the box and then there was this almighty thud.  Lewis was down and was not moving.  At that moment life would change as we all knew it!

The impact had split his head and shook his brain.  He didn’t know who we were or simple questions like where we lived.  We were rushed to A&E and when a scan didn’t show any bleed or clot we were sent to the Children’s ward for a few hours and then sent home.  We were expecting a full recovery within 24 hours.  From the moment we arrived at our door we knew that Lewis didn’t know where he was or who our pets were.

Since then, the hardest thing is learning the new son we have and accessing services we know he needs.  Everything about him is different from the things he likes, to the way he acts and talks, and how egocentric he has become.  Everyday for the last fifteen months has been a struggle, with fatigue, motivation, memory difficulties, cognitive ability and processing information.  Lewis returned to school after a year out but it is unclear at this stage whether he is coping or progressing.

Every day is a challenge and I battle with authorities, from getting Lewis’ records corrected, access to services and support for him at school.  The whole family dynamic has changed, by me giving up work and caring for my son, the financial pressure my husband, Mark, feels as being the sole provider and the impact it has had on our daughters, especially the youngest.  Ellie was only nine when he had the accident and our eldest daughter, Chloe, had just left for University.  She was missing her big sister and now she had seen her brother’s accident.  Over the next few months Ellie watched her Lewis collapse and have seizure type episodes.  On one occasion he was hallucinating and she saw him taken by ambulance unconscious.  She thought he was dead or going to die and she would never see him again.  We are mindful that even though she understands why he gets so much attention and support she must feel resentful at times.  This has caused her anxiety and some PTSD, especially as Lewis has returned to football.

One of the hardest things about our story has been the lack of understanding from our close friends and family.  When an accident like this happens others lives just carry on as normal, whereas it’s been life changing for us.  No-one explains the isolation or limitations we were all feeling, when Lewis was on bed rest for five months, he couldn’t be left, so someone always had to be here to care for him.  When we did try to go out, often the trip ended early as Lewis felt ill or collapsed.  The visits/invites from friends and family got less.  Most people only wanted to see/hear the positives but often they don’t see what challenges we were all facing on a daily basis.  Bizarrely the biggest support from friends and extended family were the ones that we least expected or from people we have met along our journey.  As a family unit we persevere to stay strong and support each other, in many ways this has made the five of us closer and not take each other for granted.  I don’t think people can relate to how big the impact is until they face something like this themselves and again this is why Young Carers has been fundamental for Ellie. 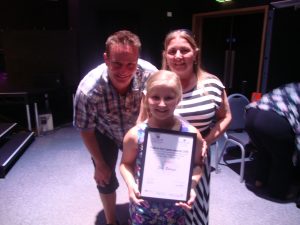 Young Carers have been an absolute asset for Ellie giving her time away from the situation, doing fun things and meeting people who are in similar situations.  Ellie was nominated for the “Young Carer of the Year” Award at the first-ever Pride in Our Carers Awards in June 2016 and we were so proud when she was announced as the runner-up.

Lewis is my son and I wouldn’t want anyone else to provide the care he needs.  My biggest motivation is my son as he has never given up.  He gets up every morning and tries, often without success but that fact he keeps going and doesn’t give up inspires me.  Knowing that our lives are often tough but his is always tougher and harder, but he never feels sorry for himself, he just carries on.  Don’t get me wrong he has bad days but accepts them and tries again the next.  We have all learned to be grateful that he is still alive and things could have been far worse.

Thank you to Sarah Rollings for sharing her story with us.

Do you have young carers in the family?

Find out how we can support them.

In a similar situation?

Find out about how we support children and young people at home and in the community.

If you have a story to share with us and help raise awareness of caring, please get in touch