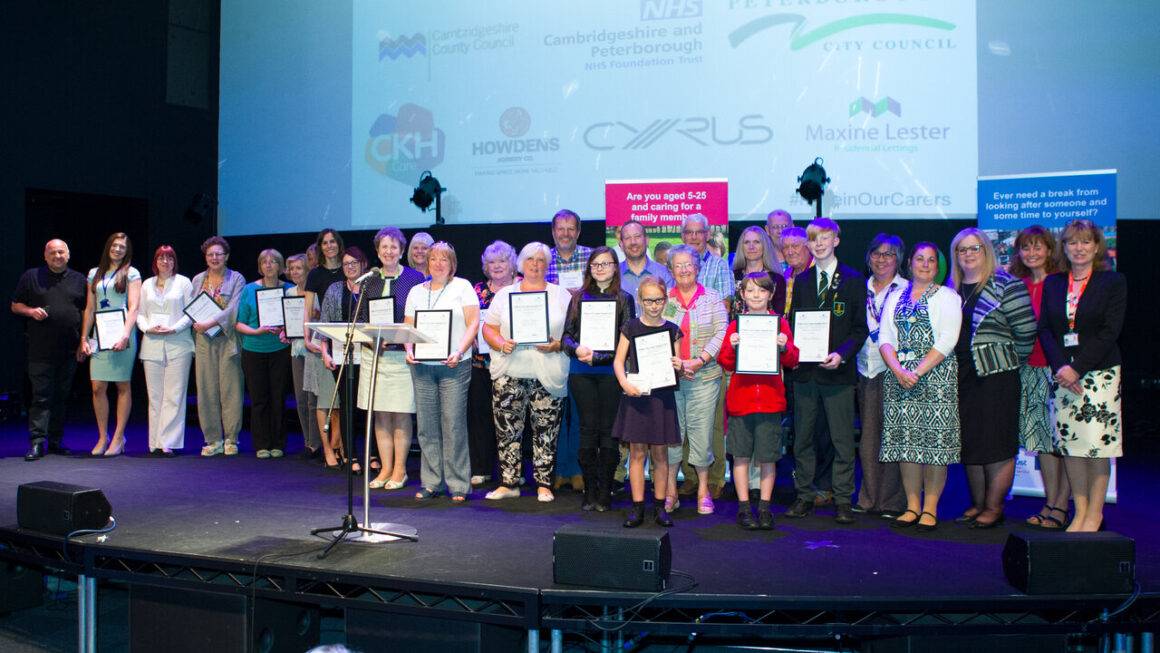 Celebrating our Fantastic Carers and those who support them

Cambridgeshire and Peterborough Pride in Our Carers Awards 2017

The dedication and inspirational devotion of unpaid family carers and organisations that support them have been honoured in the Cambridgeshire & Peterborough Pride in Our Carers Awards 2017.

A daughter from March who has had two lots of open heart surgery and a heart transplant assessment in the last six years and selflessly devotes her life to caring for her mother who has Alzheimer’s disease, constantly enabling her mum to keep her dignity and thinking of creative ways to care for her, won the Carer of the Year Award.

Emma, 50, was praised by the judging panel who said: “This is a carer with a big heart evidenced by the extra support given outside her primary caring role.  Thoughtful and enabling, I found this nomination inspiring.”

Emma said afterwards: “I am stunned, as I really didn’t expect to win.  Stunned, honoured and blessed to be named Carer of The Year.  Thank you.”

Dr Helen Brown, CEO of Carers Trust Cambridgeshire & Peterborough, who is a carer for her father, said this was a fantastic opportunity to celebrate with admiration and thanks everything that family carers, friends and the community do.

“All care takes place in a relationship.  Every relationship is different and both parties need to be considered.  We started our Caring Communities approach a year before it became the recurring national Carers Week theme, working together and offering more, helping carers to help themselves and each other, Sharing the Caring in every and any sense.

“Can’t we prepare families better about the likelihood of becoming carers?  I heard a carer say ‘there is no rehearsal, there is no training and it is certainly wasn’t something I applied for.  Charities were helpful in providing a way through.

“Another said to me, ‘When I was pregnant I had months of preparation and learning and a fabulous support network of young mums.  When my mum in Yorkshire became elderly and showed signs of dementia, it couldn’t have been more different or more lonely.  Can’t we prepare better for this?’  It is not a weakness to want some help.”

Aidan Thomas, Chief Executive of CPFT, said whilst he was proud of the Triangle of Care, a therapeutic alliance between the service user, social care professional and carer, much more can be done to support unpaid carers.

He said: “I think we sometimes step in when we have let carers down, that is when our services come into play and we have got to find ways of changing that.  I think the statutory sector has got to reach out more at earlier stages in order to prevent breakdown in care and I think that is something that is going to have to change.

“To understand what that means we have got to have a much closer link and dialogue with carers, with carers at events like this who tell us how to think policy wise and developmentally, but also individually.”

There were two runners-up for Carer of the Year Award: Betty King, 75, from Earith, who has cared for husband Del, 82, for the last 25 years after he suffered a stroke, and Bob Mullineaux, 91, a retired RAF Group Captain from Great Stukeley, who has cared for his wife Betty, 89 following her decline from Alzeimer’s disease over the last 17 years.

The awards were presented at the C3 Centre in Cambridge where passionate dementia campaigner, Tommy Whitelaw, was the key speaker.  Tommy gave up his high profile job to care for his mother and speaks around the country about his experiences of being a carer, from her diagnosis with dementia in 2007 until her death in 2012.  He writes a high profile blog called Tommyontour and is touring the country, pledging to give 632 speeches about dementia to inspire and inform about the best way to communicate with people about this.

He said flipping the question this way is the foundation for better conversations, better understanding and better care, and urged people to take time to find out what matters to those who have dementia.

His moving and passionate speech praised carers for the love they give the person they care for, day after day.

“I thank you nurses, you doctors, you care assistants and volunteers, you incredible unpaid carers out there for dedicating your life to caring for people, but I just ask you one thing, take time to find what matters and who matters to the people you care for or make a decision about the cared-for.  If you do, there is a chance you will change their life.”

Laughter therapist Robin Graham reminded us all why laughter is stress releasing, saying it allows us to be our own inner “chemist” as laughter triggers an increase in endorphins, the brain chemicals known for their feel-good effect.  He suggested we have a “box of laughter” made up from anything silly that makes us laugh.

Other awards were presented to: (see photo gallery at the bottom of the page)

Young Carer of the Year Award

Awarded to Lily Bell, 10, from Huntingdon.  She helps looks after her younger sister Daisy, 6, who has had nine brain surgery operations since she was born (a 10th operation was due on the day of the Award presentation) and also cares for twin brother Shay who suffers from severe ADHD.  Lily helps around the house too with domestic chores and also raises money for charity, having completed 5 k runs and had all her hair cut for charity, donating it the Little Princess Trust for children who have lost their hair to cancer.

Awarded to Robert Myers, Head of Care Pathways at the Marbook Centre, St Neots wo was nominated for the way he engages with local organisations and for his support in setting up the Carers Café Neuro hub which meets there monthly to support carers and people with neurological conditions.

What is a Carer Friendly Employer?  In Robert’s own words: “Quite simply, for us it’s just doing the right thing.  If you could share clinical best practice, break carers’ isolation, and support your key local third sector and NHS partners, wouldn’t you?”

Carer Friendly School or College of the Year

Awarded to Young Carers Support Worker Lynda Johnson at Hampton College, Peterborough for her outstanding work identifying and supporting young carers in the classroom.  She has significantly grown the service and increased the number of young carers identified each year.

Lynda was nominated for going the extra mile for young carers by holding regular reviews of their caring role, putting into place a policy to ensure young carers’ rights are protected at school, as well as talking to the governors and senior leadership team about what else can be done.

She prepares assessments for the needs of the whole family, which includes referring young people to the Young Carers team at Carers Trust Cambridgeshire “because I have seen what a valuable resource it is for families.  Giving children and young people the chance to be children, have fun, find adventure and make friends is crucial to building their strength and resilience so they can face what life brings to them.”

Awarded to the Cornerstone GP practice in March that was praised by judges for creating “a fantastic model for a health organisation” in prioritising identifying carers early, the brainchild of practice manager Sarah Fox.  It has launched a carers group which is run by a newly appointed Patient Liaison Officer, Ellie Buckton and is believed to be the only GP practice in Fenland to have a dedicated member of staff working with family carers.

Awarded to Lucy Perkins, from the Eastern Regional Child Brain Injury Trust, based at Addenbrooke’s Hospital, Cambridge, for supporting a family whose son Lewis acquired a life-changing brain injury during a game of football just days before his 16th birthday.  Lewis’s eldest sister Chloe had just left for university when the accident happened in October 2015, with younger sibling Ellie only nine at the time.

In nominating Lucy, Sarah Rollings, from St Ives, said: “Whenever any problem has presented for either of my children she has stepped in and given them more that we could have imagined, whether it’s educating school staff, educating peers or finding grants available to enable the children to attend activities, as well as to help with their with their confidence, create new opportunities or build self-esteem.”

Awarded to Linda Collumbell, Chair of Trustees for Carers Trust Cambridgeshire and Peterborough, for dedicating a lifetime to working in social care and with carers.

Awarded to Estelle Mitchell, Caring Communities Manager with Carers Trust Cambridgeshire and Peterborough, nominated by the CPFT for her outstanding work supporting family carers in the community and partners.