Caring Together have been presented with the Hunts FA Grassroots Project of the Year Award after being nominated for The FA and McDonald’s Grassroots Football Awards 2019.

A range of activities are provided as part of our work with young carers and we have worked with Hunts FA to provide Futsal (a type of indoor football) events at St Peters School and our community group for primary-aged young carers in Huntingdon. Our work with Hunts FA led to us receiving one of the nine awards they presented. 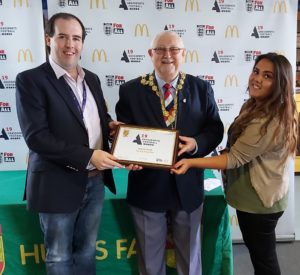 Andy Coles, senior football development officer, said: “There is so much dedication and commitment throughout the grassroots game. I would like to congratulate each and every one of our County FA winners for their inspirational work in their local communities.”

Andy McGowan, Business Development and Communities Manager at Caring Together, said, “We provide many different types of support and opportunities to the young carers we work with. These are not just focused specifically on their role as a carer, we work to support their health and wellbeing, and to give them opportunities to thrive as individuals.

“We and the young carers really appreciate the support provided by Hunts FA to promote healthy lives for young carers through sport – with Hunts FA regularly supporting  groups of young carers to do sports sessions.”

Andy and Ella McKenzie (pictured) were presented with the award on behalf of Caring Together by St Neots’ Mayor Gordon Thorpe at a ceremony on Saturday 5 October.

The FA and McDonald’s Grassroots Football Awards recognise and celebrate the work of individuals and groups to instill The FA’s PRIDE values – Progressive, Respectful, Inclusive, Determination and Excellent – and make a positive difference in their club, league or local community.

Following receipt of a record 4,073 nominations, The FA has worked alongside respective County FAs to select appropriate winners across 9 categories. The full list of Hunts FA Grassroots Football Awards 2019 winners are:

You can go to caringtogether.org/support-for-carers/young-people to find out more about the support available to young carers from Caring Together.