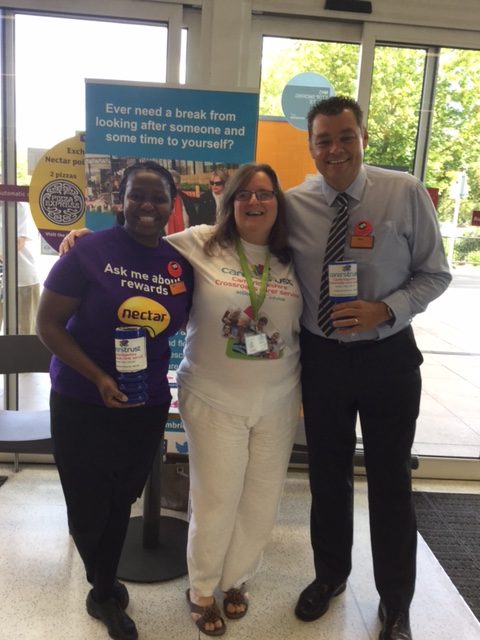 My Visit to Sainsbury’s for Charity of the Year

On Friday 5th August, I spent the day at Sainsbury’s in Cambridge raising money and awareness of carers. Carers Trust Cambridgeshire have just been voted as Coldhams Lane Charity of the Year. We are really excited to work with Sainsbury’s. They were a huge support for the Pride in Our Carers Awards in June and they are really enthusiastic about our charity. They told us that they raised £15,000 for the Charity they supported last year and they are looking to at least match this, if not exceed it completely.

During the time I was there the store was really busy and lots of people came to put money in our collections tins. Some of them would say that it was only change and I found myself telling them that ‘every little helps!’ (ooops wrong store!) A lot of people approached me to say they were carers or they were previously carers, and this included staff at the store. I gave out plenty of leaflets to people and also took some referrals for others wanting more information. All in all it was a fascinating day and it was really nice to get out of the office to meet people.

The staff at Sainsbury’s were great, really friendly and helpful and really welcomed me in. They all said how much they were looking forward to working with us in the future and how much they wanted to make sure that they raised lots of money for us.

If any staff or volunteers would like to spend some time at Sainsbury’s in Coldhams Lane to talk to customers to let them know more about what we do, then please contact Laura Green in our St Ives office (01480 499090) to arrange the best time.