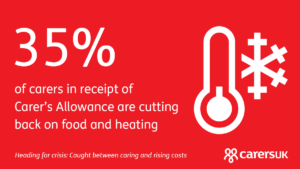 We have joined Carers UK and 64 other organisations in calling for the Chancellor of Exchequer, Rt Hon Jeremy Hunt MP, to provide targeted financial support to unpaid carers in his upcoming Autumn statement on Thursday 17 November.

An open letter, signed by us and the other organisations, has been sent to the Chancellor, asking him to seriously consider the severe impact that the cost-of-living crisis is having on unpaid carers of all ages.

The letter states, “as many as 10.6 million people are now providing some form of unpaid care across the UK; the staggering levels of care and support that they have provided during the pandemic, estimated to be worth around £193 billion per year, has undoubtedly played a key role in supporting our formal health and social care systems. But this has come at an enormous personal cost to unpaid carers.

It is vital that carers, particularly those on low incomes or rely on Carers Allowance, are provided the financial security they desperately need. We are asking the Government to:

Read online or download the joint open letter to the Rt Hon, Jeremy Hunt, Chancellor of the Exchequer, regarding the unprecedented cost of living crisis facing unpaid carers [PDF, 118kB].